Starting from assignment 2, I'll using a kali linux VM to do the homework.

Daddy told me about cool MD5 hash collision today. I wanna do something like that too! 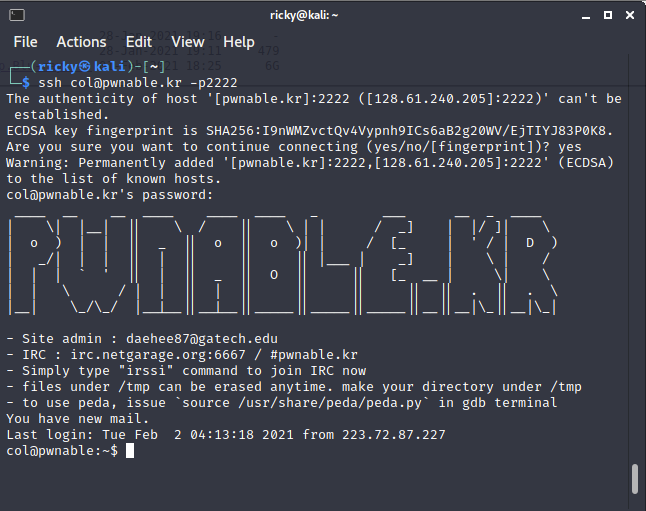 The answers to the questions:

The following pictures I found at http://www.csit.parkland.edu/~smauney/csc128/permissions_and_links.html and https://pamirwebhost.com/check-linux-file-permissions-with-ls/ are very helpful with leaning the linux file permissions: 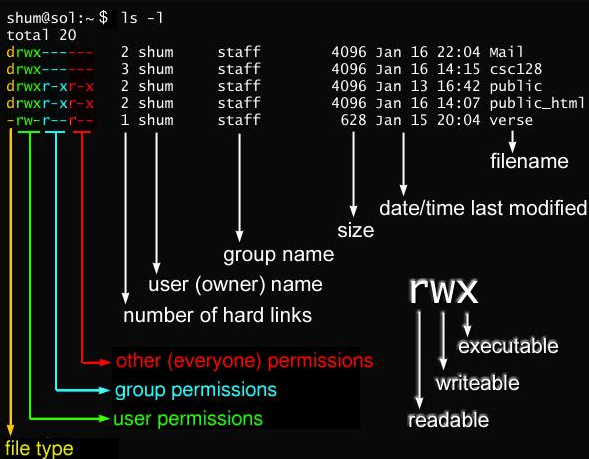 Create the source file by using vi flag.c and paste the code into the file: 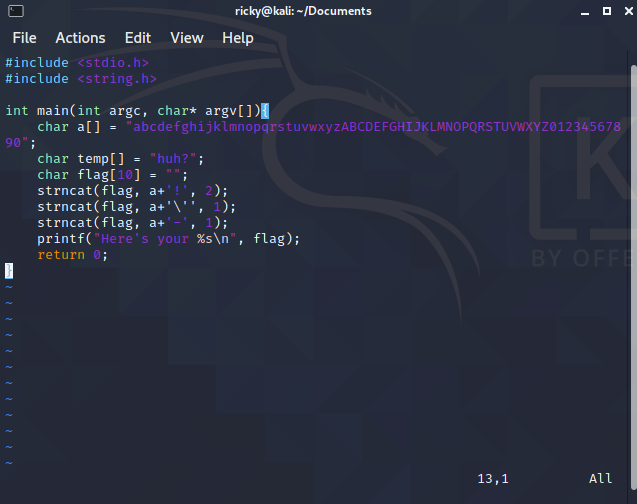 Compile the source code by gcc flag.c -O ex_flag, compile and save the binary to ex_flag and finally, execute it: 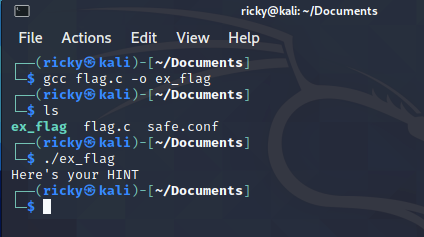 So for the questions:

What I understand about memory:

And at the bottum of the memory is stack:

What I understand about endianness:

Endianness defines how a operating system read memory, from high address to low address or the oppsite order.

Answers to the questions:

After login, I checked the directory using ls, I find that there's a file called flag, it's possible where the flag is. My mission is to access the file. Then I checked flag file's permission using ls -l .

So, flag is owned by col_pwn. Before I tried other stuff, I checked if my current user is on the sudoer list using sudo cat flag.

But I'm not a sudoer. I have a new idea while dealing with sudo, on January 26, 2021, someone found sudo has a buffer overflow bug, which is exploitable by any user on the machine. So, I look this up on Google and find this article https://www.sudo.ws/alerts/unescape_overflow.html. Here's a test to check if the machine has the bug:

To test whether your version of sudo is vulnerable, the following command can be used:

A vulnerable version of sudo will either prompt for a password or display an error similar to:

A patched version of sudo will simply display a usage statement, for example:

If the sudoers plugin has been patched but the sudo front-end has not, the following error will be displayed:

Here's what i find:

And the OS has been patched.

Next, I opened col.c to see the code using vi col.c : 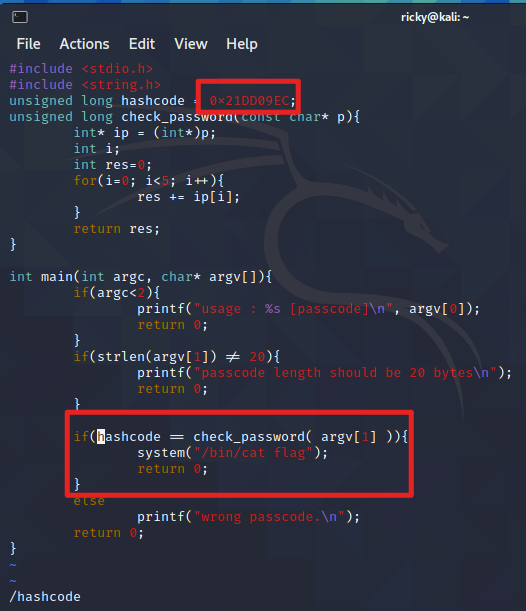 So, the question became how to make 0x21DD09EC equal to check_password(INPUT).

After reviewing the check_password() function, it takes the char input, force convert to int, copy it to the location of pointer ip, then add them together like numbers. From the notice, I know the input is 20-bytes long. And one int takes up 4 bytes, so it's 20/4=5 numbers I need know. 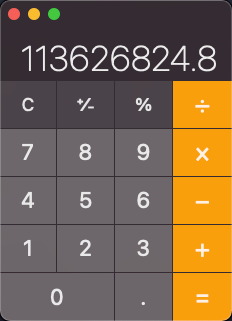 Finally, we input the numbers like the course website(https://whisperlab.org/introduction-to-hacking/lectures/collision):

Surprisingly, the answer is wrong:

And it is little-endian:

So, I need to reverse the input and try again:

Eventually, I have the flag:

Flag: daddy! I just managed to create a hash collision :)

The challenge asks me to download 2 files, so I did. And it seems bof is a executable file, so I give it excute permission and run it: 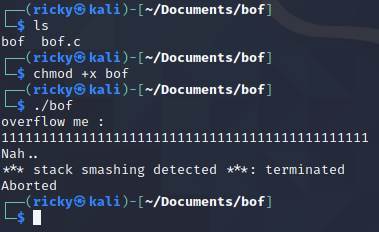 Ok, so nc pwnable.kr 9000 is running the same program:

The next step is to analysis the source code, I use vim to see the code, vi bof.c. 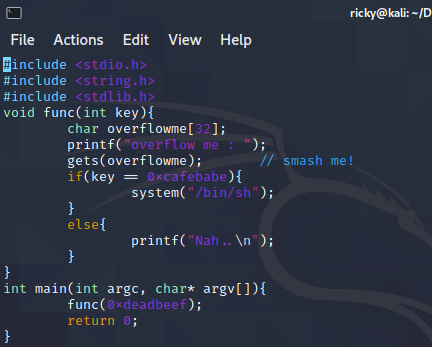 so, main() calls func() then exit, the logic is in function func(). It has an integer input key, then compare the key with 0xcafebabe. Before comparison, the program requires a std input from keyboard and save it to a 32 bytes char variable overflowme, so it's possible to overflow variable overflowme and write the data (0xcafebabe) to the address where variable key is. This will make the varibale key equal to 0xcafebabe and calls system("/bin/sh") then enter a new bash. (gets() function in C language does not validate the memory, it just wirte everything it gets to the memory address)

I'll try to get the exploit on my local kali linux and then use it on pawnable.kr's server. This time, I'll only use gdb to debug the program, but I could also use a gun program on kali linux to debug it. In order to debug c program with GDB, I need to re-compile bof.c with flag gcc -g3 -m32 bof.c -o new_bof . -g3 means compile full debug information to the binary(It's ok to use g3, because it's a small program, while debug complex program, -g is much preferred). -m32 means compile it to 32-bit binary.

But it did not work:

It seems that I don't have stdio.h header, and this is impossible on a linux machine with gcc. So, I googled the error: 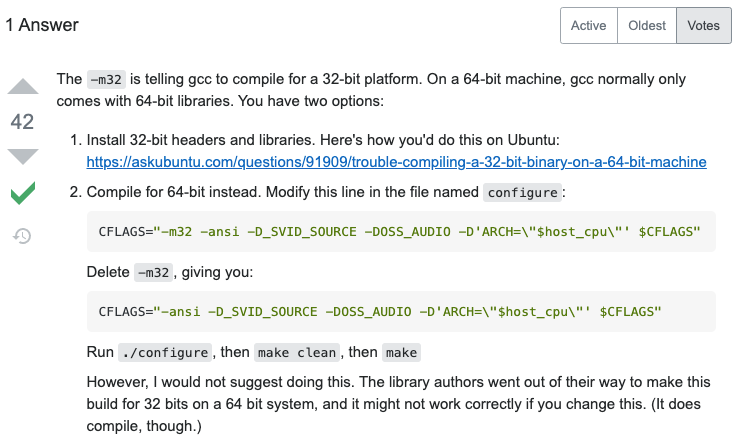 ok, I need to install 32-bit library manully. Kali linux use apt to manage the packages, so I only need to apt-get install gcc-multilib to install mulilib.

Then run gcc to compile it again, and it worked just fine:

Great! GDB is not installed too:

After install GDB, I can finally debug the program: 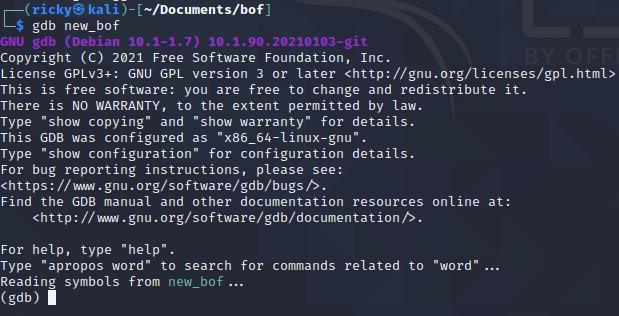 Then I use run to start the program and try something random just to play with it. 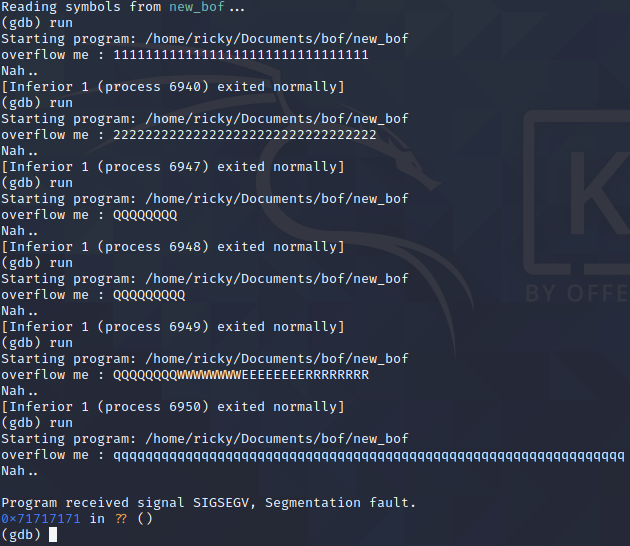 I take a look at the source code, I understand I need to set a breakpoint at the comparison to check the value in key. (it's just partial code in the picture) 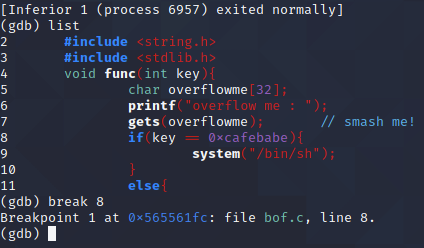 Now run the program, I put a long string to overflow it:

So, the key's value is replaced with 0xffffd180, I tried again without overflow: 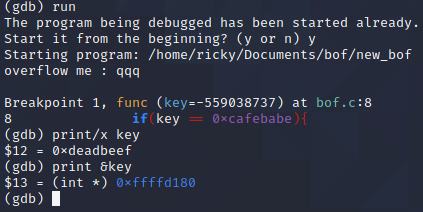 Now I know the buffer overflow could work on this program. So, I use an online tool genrate a string(https://wiremask.eu/tools/buffer-overflow-pattern-generator/) which is very easy to use on buffer overflow. What I used here is Aa0Aa1Aa2Aa3Aa4Aa5Aa6Aa7Aa8Aa9Ab0Ab1Ab2Ab3Ab4Ab5Ab6Ab7Ab8Ab9Ac0Ac1Ac2Ac3Ac4Ac5Ac6Ac7Ac8Ac9Ad0Ad1Ad2Ad3Ad4Ad5Ad6Ad7Ad8Ad9Ae0Ae1Ae2Ae3Ae4Ae5Ae6Ae7Ae8Ae9Af0Af1Af2Af3Af4Af5Af6Af7Af8Af9Ag0Ag1Ag2Ag3Ag4Ag5Ag

I could use the string to find where is target place.

I know it overflows the varibable at the start of Ab . Next is to find the content of variable key, then I know the place to overflow key's data.

I learned to print the key as a sequence of 4 characters on the class tutorial notes.

The bold words are where key is. Now I can set any value I want to key.

Since it doesn't matter what content is in the overflow variable, so I replace the long string with one char q.

Now I have the overflow string, so I'll use a python script to help me input it:

This pythin script will input the data to pwnable.kr's 9000 port. It's like running a local program ./bof. The difference is piped the data to a remote server.

Finally, I have the user col's shell and use it to get the flag.

And the flag is daddy, I just pwned a buFFer :)